St. Clair Detrick-Jules is a Washington, D.C. native with a laundry-list of credentials. She’s a filmmaker, director, producer, documentarian, and activist — oh, and she’s a Brown University alum, studying French & Francophone Studies at the historic Ivy League institution. Detrick-Jules attributes her affinity for the arts to her D.C. upbringing; her mother was, and still is, a writer and her father sang and played the guitar for fun. Her parents often hosted musicians in their home when she was growing up, an early experience that, combined with D.C.’s thriving arts scene, influenced her decision to pursue a career in the arts.

Detrick-Jules wields her camera lens like a scythe, cutting through the chaff to reveal hard truths. For 2017’s National Hispanic Heritage Month, she directed and produced 30 Days, 30 Stories — a video series focused on how Latinx youth and young adults in D.C., navigate the tensions between their cultural traditions, family expectations, and personal dreams. She also produced DACAmented, a documentary about nine DACA (Deferred Action for Childhood Arrivals) recipients in the United States. Their stories take place during the Trump Administration and provide gut-churning insight into life as an immigrant in the US. Given the unflinching honesty of DACAmented and Detrick-Jules’ skill as a filmmaker, and essentially, a storyteller, the film received an avalanche of awards at film festivals.

But, sisterly love inspired her latest project and debut photo book, Dear Khloe: Love Letters To My Little Sister. One day Detrick-Jules’ father told her that Khloe, her little sister, was being bullied at school because of her afro. Attacks like these have a knack for cementing themselves in the mentality of young Black children, but Detrick-Jules immediately worked to uproot the negativity before it seeded.

As a biracial Afro-Caribbean, the topic of natural hair and self-love resounds closely to Detrick-Jules. She traveled the country photographing and interviewing Black women for almost two years, creating a message of empowerment told through the stories of 101 women from ages four to 65.

Detrick-Jules and I met over FaceTime to talk about Dear Khloe, the CROWN Act campaign to end hair discrimination, the resurgence of natural hair, and what it means to be a filmmaker and photographer. Read our conversation below and check out Dear Khloe’s Instagram for a sneak peek at the book, which Detrick-Jules self-published this year but will now be released by Chronicle Books in Fall 2021.

You got your degree in French and Francophone studies. Is that right? How did you get into filmmaking?

I was interested in filmmaking in college as well. There were some filmmaking classes for the major, but I just wasn’t too into the theory. And I loved all my French classes. But I took a [documentary] filmmaking class my last semester of college. For the final project, I decided to do a short documentary about DACA. Trump had just rescinded it, and I wanted to do something. I think a lot of my activism revolves around my art and amplifying voices.

I’ve read people talk about being behind the lens, and how you’re supposed to be a casual observer and not really interfere. But do you feel like as a filmmaker there’s an intersection between activism and filmmaking where you should play more of an active role?

That’s a difficult question that I think about a lot. Any piece of art you make that consists of interviewing other people is going to be biased in some way, because you’re choosing which footage to use, or which snippets of the interviews to use. You’re choosing what order to put it in. It’s kind of impossible to separate them sometimes. I try as much as I can to respect the subjects in my work and try to stay true to their beliefs and their feelings and their stories. Even if I might not agree with some of them, or even if they might have had different experiences. I try my best to sort of just amplify.

A lot of the women [in Dear Khloe] talk about celebrating their Black hair as being an active protest. Do you see it the same way, as a Black woman? Or as a documentarian?

As a Black woman, I definitely agree. There are a couple of women in the book who said for them, they see it more from, like, a biological perspective. It’s just what grows out of their head. It’s DNA. And I understand and respect that. But I definitely see natural hair as a form of protest, especially in this country. Considering, in most states, you can still be discriminated against for wearing your natural hair in school and the workplace. You can be discriminated against while out in public. For so long, starting from when Black people were brought to this country, so many Black women were forced to cut their hair. They were forced to wear scarves and things over their hair. It was always tamed or controlled by other people. And so I think that now, with Black women saying, ‘Actually, we’re not going to allow you to control our hair anymore,’ I definitely see that as an act of protest, an act of resistance. It makes people of other races feel uncomfortable to see Black women just being themselves and not utterly concerned about what the rest of the world thinks of us.

You’re making this really grand gesture to your sister. It’s such a supreme act of sisterly love. What does Khloe think about it?

I’ve shown it to my sister, and she is really excited about it. I think it’s made her feel really special. When I started working on this book, she was four and I started working on it because she just hated her hair. She was crying about how much she hated it. The little kids at school — she goes to a majority white school — they were making fun of her, her natural hair, her skin color. I’m so much older than my siblings that I feel almost like a third parent. So [I said], ‘Absolutely not! No one is going to make my sister feel like she’s any less than.’

I’ve been sharing bits and pieces with her. We’ve been reading the whole book together and she’s really excited about it. I remember a few years ago, we were in a shopping mall, and there was this model, this Black woman with natural hair. And my sister was like, ‘Oh, she’s ugly.’ I was really sad because my sister looks like that, she has hair like that. And now, for her to see people with that same hair texture and think of them as beautiful, it’s just this huge transformation. And she’s only seven. I think for so many Black women, it takes us so much longer to embrace our natural hair. I’m so happy that she is realizing that at a young age.

What particular section of the book is resonating with you more right now?

I see myself in all of the Black women in my book, but I think maybe “Mothers And Daughters.” I’m not a mom, but I really appreciate that section. And some of the stories in that section are not as happy. But there are also some really great examples of motherhood. You know, there’s one mom who, when she noticed that her daughter didn’t love her natural hair, she actually decided, ‘You know what, I’m going to go natural and lead by example here.’ That’s really beautiful.

There’s a section where it’s the mother and the daughter, they’re doing yoga, and they both have locs. And you could feel it on the page. The daughter was so adamant like, ‘I love my hair. I love myself. Period.’

That’s how confident I want my sister to be because you could just tell that her foundation was so strong like nothing could rock her. It’s so amazing to see those phenomenal examples of parenting.

Your book is about Black sisterhood, but do you see this contributing to a larger narrative of natural hair and self-love?

Definitely. Black women’s hair is so versatile. Black women have different hair textures, curl patterns — even on different parts of our head, we might have different curl patterns. And so I wanted to capture that diversity and versatility of Black women’s hair. Like, it can be an afro. It can be braided. It can be in twists. There’s so many different things that you can do. I definitely hope that it ties into this larger natural hair movement. A couple of people talked about it also in the foreword. There’s a bit about the history of natural hair. Hopefully, this time, the movement will stay, that it becomes more than just a trend, that it’s something that will actually pass down.

This is happening alongside the CROWN Act, which is still being passed in different states. This must feel like a reckoning of sorts to you.

Definitely. When I started working on the book a couple of years ago, the CROWN Act hadn’t been passed anywhere yet, like in California, New York, and New Jersey. And so it’s really great to see that the more I’m getting into this and I’m really becoming passionate about it, to see it happening on a nationwide level as well.

Can you talk a little bit about your own hair journey? Did you always accept your hair?

I did not always like my natural hair. I’m biracial. My mom is white, and my dad is Black. I grew up in the US and my dad is from the Caribbean. All of his family is either in the Caribbean or France. I didn’t grow up around my Black family, but I did grow up in a Black neighborhood. My mom definitely wanted to make sure that I was around people who looked like me, but I went to a majority white Montessori School. Once I got to that school, when I was six years old, that’s when I really noticed my difference. I was really paying attention to my skin color and my hair texture and I lost all my confidence. Before that, I was a pretty confident kid. I didn’t care what anybody thought about me. And then I got to this elementary school where I was surrounded by all these white kids with light skin and straight hair. That messed with me. It wasn’t until I got to college, and I was surrounded by Black women who were just very proud of their Blackness, that’s when I really started being proud of my heritage and being proud of my hair.

In your book, you ask everyone else to give advice to your sister, but do you have advice that you would share, not just to Khloe, but to Black women overall?

One big thing I would say that’s helped me a lot, learn about your history. Our history isn’t told. It’s purposefully excluded from the history textbooks, from the mainstream American narrative. Learning about my history has really helped make me be proud of everything that comes with Blackness. Now, if a thought comes across my mind of, ‘Oh, you know, my hair would be prettier straight,’ then I just think about my ancestors who gave us so much, risking their lives giving so that people like me could be where I am now. How could I reject this gift of natural hair that they gave me? It would be an insult to them to not love it, to not embrace it, to not be super grateful for it. And so, that’s one thing I’d say to the younger generation. Learn your history and see all the beauty, both physically and mentally, of your ancestors.

Pre-order Dear Khloe here. Self-published versions of the book are available to organizations/schools by request. Keep up with St. Clair Detrick-Jules on Instagram here. 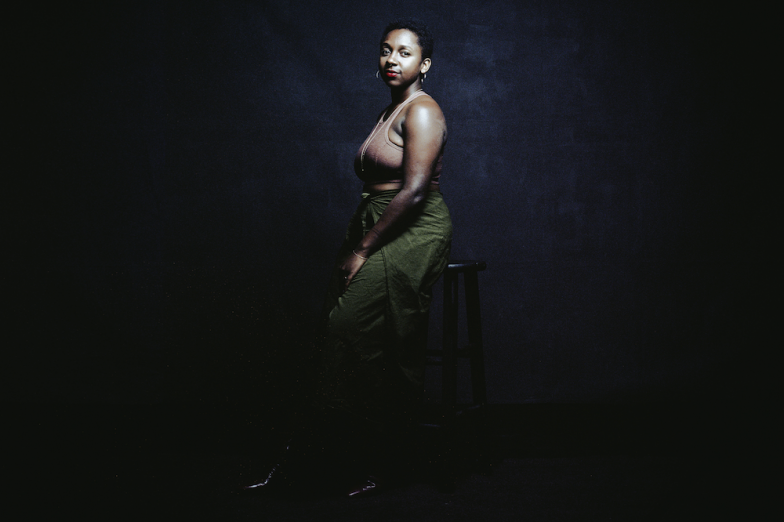 Like plenty of healers before her, Marisa Hall fell into herbalism initially out of a need to heal herself.